Do we condemn a man and the book that is based on his life in the mid 19th century for doing something every man could do legally based on today’s laws in the United States?

Paid purchases are up slightly compared to where they are on those months when I am not promoting the book running ads. Before the ad ran and the giveaway ended, the book was getting about one or two reviews a month. In July there have been days when eight reviews appeared in one day. Paid sales are not dramatic but they have increased and sales are up from almost nothing for my other three titles.

This is about the almost 8-year long journey before I offered my Concubine FREE for 16 days in the United States, Canada, Australia, India and the United Kingdom (free copies were downloaded in all five countries) between May 29 – June 13, 2015, and it wasn’t an easy decision to make—to give away a novel that took more than a decade to research (with an emphasis on research), write, revise, edit, revise and edit again several times. A lot of time and work went into writing Robert Hart’s story set in 19th century China.

To be clear, My Splendid Concubine is not a woman, and this post is about what happened when the novel was offered for free for the first time in tandem with a BookBub advertisement. Concubine is a historical fiction novel based on the real life of an Irishman who went to China in 1854 when he was age 19.

I started writing this novel in 1999 when I was dating Anchee. We dated for several months and were married December 1999. When we were dating, before we got married, she was working on her fifth novel, “Empress Orchid”, and she mentioned an Irishman named Robert Hart, who had worked for the Qing Dynasty until 1908—for about 50 years.

In early 2013, sales started to slip after the 3rd edition came out, so I submitted My Splendid Concubine to BookBub, and the historical fiction novel was accepted for a $0.99 sale that ran on June 16, 2013. By the time that first ever $0.99 sale came to an end, about 2,900 copies had been sold—at the time that represented 22% of total sales since the 1st edition had been published in 12-2007.

Concubine was submitted to Book Bub again in 2014 and was accepted for another $0.99 sale in June of that year. This time, Concubine sold more than 3,000 copies at the reduced price, and the novel picked up a review from: 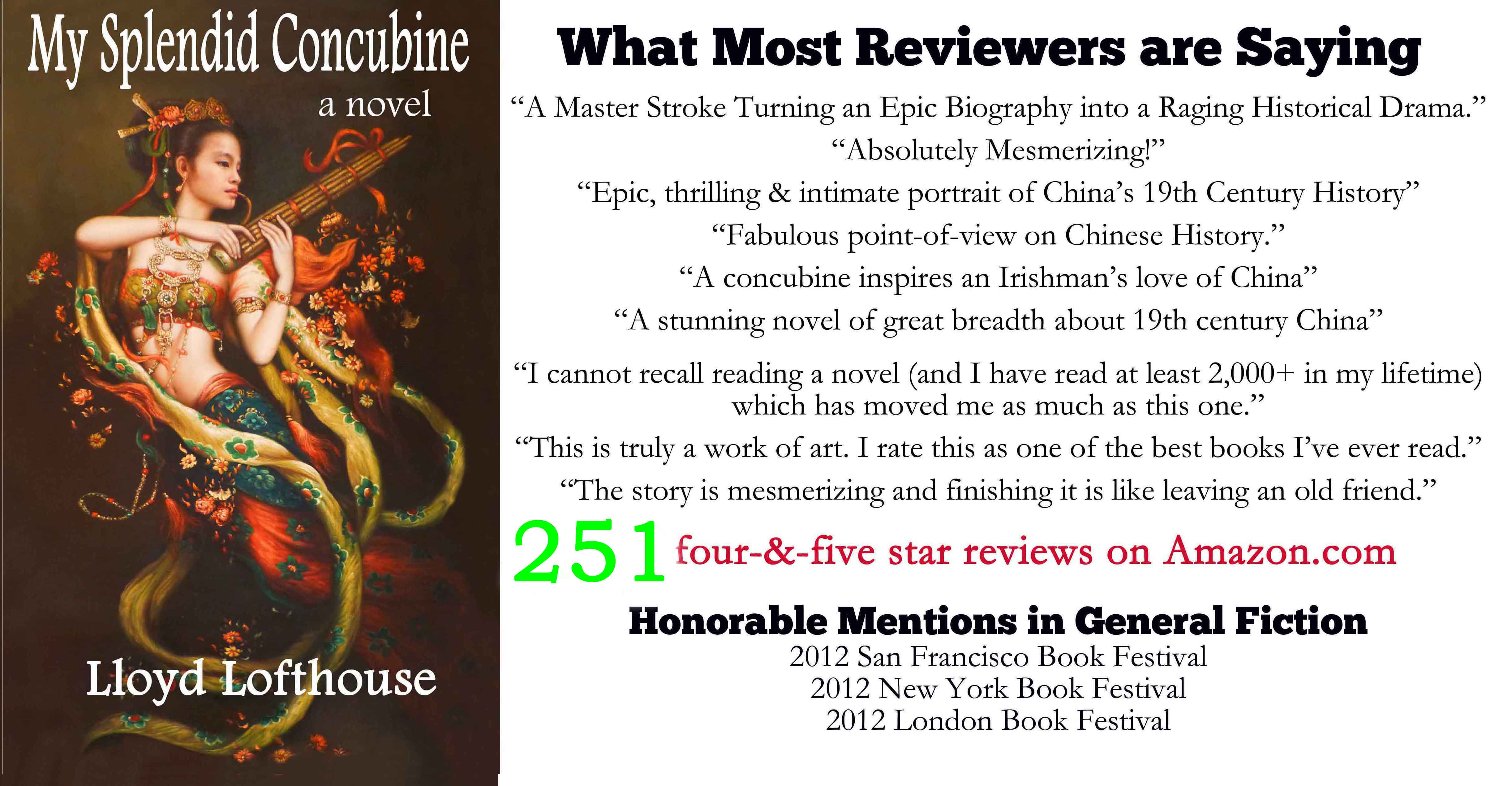 In April, I ran the $0.99 sale for Concubine anyway and advertised through several sites instead of BookBub: The Fussy Librarian, The Choosy Bookworm, and eReaderNewsToday — 177 copies sold, and that represented about 46% of the total sales of all four of my titles for the first five months of 2015.

Then I resubmitted Concubine a 2nd time to BookBub in early May, but set the offer for FREE, and BookBub said yes and scheduled the date for their ad to run on June 11.

This was the first time I’d offer one of my books FREE, and it isn’t as if I didn’t know that this was a viable method to market books and reach more readers.  I’ve read about the success other authors have had offering at least one of their titles for free, and I understand that it works best for the first book in a series, but I didn’t have a series (I #AmWriting a five-book series now, and I plan to publish the first one in about a year and maybe sooner).

The idea behind offering a book for free is to generate word-of-mouth for an author’s work, but, as long as my work was selling several thousand copies annually, I was reluctant to make that decision—until the sales fell off a cliff from a four-year (2011-2014) monthly average of 385 copies a month to an average of 81 a month for the first half of 2015.

When I heard back from BookBub that Concubine had been accepted for a free ad, I let a group of authors that I belong to at Historical Fiction eBooks know—we share information and support each other—and I was advised to start lowering the price immediately, because Amazon doesn’t make it easy to set a price to FREE. I was told that Concubine would have to appear FREE on Barnes & Noble and iTunes before Amazon would match the price.

I logged on to my Draft2Digital account and submitted the price changes the same day, and Draft2Digital submitted the changes to: B&N, iTunes, Kobo, Scribd, and inktera, and it took about three days for all the prices to change.  That was when I logged in to my Amazon kdp account, scrolled down to Contact and left a request for a price match with links to B&N and iTunes.

Once Amazon dropped the price to free on 5-30, I attached the following image to a Tweet and penned it to the top of my Twitter page. During the next 16 days, I swapped that Tweet out and penned a fresh one several times a day for my more than 12k Twitter followers to Retweet. I have no idea how many times that Tweet appeared on Twitter, but I think it was probably hundreds and maybe even thousands of times.

I also paid eBookBooster $35 to submit Concubine to 45+ sites that advertised free books for free. I only know of five that announced the free offer: FreeBooksAndMore.com on June 5; bestebooksfree.com on June 7; Top 100 Best Free Kindle Books on June 9; Booklover’s Heaven on June 10; and eBookDaily on June 12. 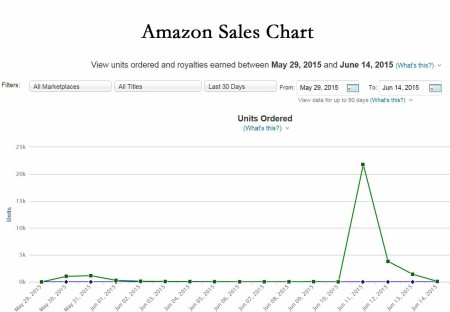 Then on June 11th, the BookBub ad appeared early in the morning, and 21,791 copies were downloaded for free on Amazon that day. On June 12, another 3,813 were downloaded followed by 1,412 on June 13.  An additional 7,573 copies were downloaded through Draft2Digital, but there may be more to come (D2D has to wait on the retailers to report sales. For instance, 4,730 free downloads were not reported until June 18 and those were only from iTunes and Barnes & Noble so there may be more to come when the remaining retailers report in.). 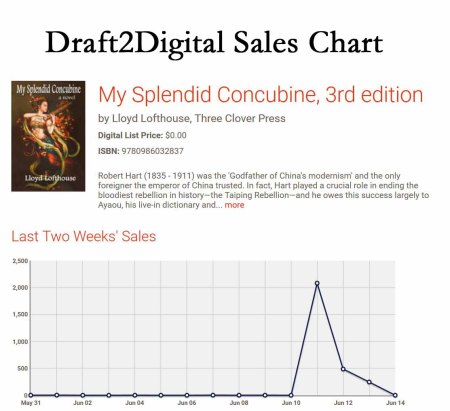 By the time I submitted the price change for “My Splendid Concubine” from FREE back to $3.99 early in the morning on June 14, 33,703 copies had been downloaded for free for a book that in almost 8 years had only sold 20,895 copies. Concubine also made it to #5 free in the Kindle store for the Top 100 List.

Since June 11—the day the BookBub ad ran early in the morning—to June 18th, Concubine picked up 8 new Amazon reviews marked as a Verified Purchase: seven 5-stars and one 4-star. Before the sale, Concubine was picking up about 1 or 2 reviews a month.

What about sales after the price returned to $3.99? Concubine has sold 22 copies, Crazy is Normal sold one, Running with the Enemy sold four, and The Redemption of Don Juan Casanova sold two. In May, all four books only sold 30 copies, but so far for June, forty-four have been sold with twelve days left before the end of the month.

Do you think giving away almost 40,000 FREE copies and paying more than $300 for the BookBub ad was worth it?

about books, book promotions, book reviews, Crazy is Normal, Lloyd Lofthouse, My Splendid Concubine, Running with the Enemy
19th century China, authors promoting books, book promotion, giving your books away and paying to do it., My Splendid Concubine, offering a novel for free, paying Book Bub to give your books away for free, ROBERT HART, the importance of book reviews, the importance of word of mouth, The value of a Book Bub Ad, Why should authors give away their books for free