MIT Technology Review reports, “Oxford researchers say that 45 percent of America’s occupations will be automated within the next 20 years.”

And hear what even Bill Gates, the infamous billionaire who is out to destroy public education in the United States, has to say: “Software substitution, whether it’s for drivers or waiters or nurses … it’s progressing. …  Technology over time will reduce demand for jobs, particularly at the lower end of skill set. …  20 years from now, labor demand for lots of skill sets will be substantially lower. I don’t think people have that in their mental model.” Business Insider

It isn’t government we should fear. We should fear whoever creates and controls the manufacturing behind the next step in nanotech, the memristor. With the creation of the memristor a few men are moving one step closer to holding the power of gods.

CNN.com reported the next step beyond the transistor and said it would revolutionize electronics. But it might also lead to a revolution that would go far beyond electronics when combined with cloning and DNA manipulation. The memristor might lead to a lifeform that would be the property of corporations and/or wealthy individuals—a slave that requires no pay, medical or retirement—programmable and equal to or smarter than humans.

In fact, who controls the manufacturing behind the memristor might end up controlling the world and with the memristor, the rest of us would be replaceable by those billionaires who already think like gods.

Let me ask you this question—if you had a choice, who would you vote for to rule the world—a government guided by the Bill of Rights that was written to protect the people from their own government or billionaire oligarchs and corporations that don’t answer to the Bill of Rights?

At this point, you might be thinking who would be foolish enough to trust Bill Gates, the Waltons and/or the Koch brothers over an elected government, and I will tell you that there are millions of people out there who have been fooled to already trust them and are more than willing to put their fate in the hands of the few who answer to no one.

His fourth book is The Redemption of Don Juan Casanova, and Don wants to discover what it’s like to be loved by only one woman. His problem is that he was raised by his grandparents to become a Lothario, who loves and then leaves women for the next conquest, and as he approaches 40, he is facing a crisis.

His grandfather and then younger brother have been viciously murdered, and Don is the prime suspect. As he struggles to stay out of jail and end his life of serial seductions and find one woman to love, he’s discovering it isn’t easy to kick an old habit, and his mother isn’t helping by quoting scripture every chance she gets in an attempt to change her son’s lifestyle of sin for one of piety. 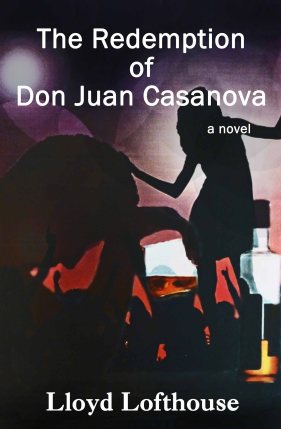 Lloyd Lofthouse also worked as a maître d’ in a nightclub called the Red Onion for a few years. A romantic at heart, in his award winning novels, he tests true love in difficult situations and the challenges of keeping that love alive. My Splendid Concubine, his first novel, is an epic love story that teaches acceptance and respect for other people and their cultures. Running with the Enemy, his second novel is a love story that will either cost the characters their lives or will complete each other’s hearts. Lloyd Lofthouse lives with his family in California’s San Francisco Bay area.