Forty-Five thousand U.S. Businesses are Built on a Foundation of Legal Seduction and Sex

The legal seduction and sex industry in the United States is built on a foundation of alcohol, food, music and consensual sex, and it earns more than the $14.6 billion that goes to illegal prostitution or the $10 – $12 billion spent annually on pornography – NBC News; Business Pundit.com

But the $20 billion annual legal seduction and sex industry beats them all with 45,000 locations. Even box office revenue in North America is less than $11 billion annually. – Statista.com

The legal seduction and sex industry in the U.S. is also an industry where global corporations seem to keep their distance even if their CEO’s, board members, managers and employees are patrons. Instead, it is mostly operated by individual entrepreneurs.

What’s interesting is that we seldom if ever hear about the legal seduction and sex industry in the US media.

Why is that—maybe because most Americans only want to think of the U.S. as a pure, righteous Christian country—a fake role model for the world? After all, the Pew Forum.org reports that almost 80% of adults in the United States are Christians. In addition, the Hartford Institute estimates there are roughly 350,000 religious congregations in the United States. This estimate relies on the RCMS 2010 religious congregations’ census. Of those, about 314,000 are Protestant and other Christian churches, and 24,000 are Catholic and Orthodox churches.  Non-Christian religious congregations are estimated at about 12,000. There are about 56 million weekly worshipers who go to church—less than 18% of the total population..

Does this make the United States a Jekyll and Hyde culture—on one side we have religion and on the opposite side legal seduction and sex that’s mostly ignored by the media to satisfy what devout (the less than 18%) religious Americans don’t want to hear?

In the early 1980’s I was the maître d’ for a few years for a nightclub, restaurant combination that was part of a small chain in Southern California called The Red Onion. The Red Onion where I worked had three bars on one side of the building and three dining rooms on the other side—one with a glass ceiling with full-sized palm trees inside. The lobby joined the two but the kitchen served both.

The nightclub was capable of holding several hundred lusty dancers and drinkers, and it had a DJ’s booth along with a large stage for live entertainment. The dance floor was between the DJ and the stage.

“While the dance floor in a nightclub of this size is the central arena of seduction, actual sex usually takes place in bathroom stalls, exit stairwells, and so on. In other cases the disco became a kind of ‘main course’ in a hedonist’s menu for a night out.” – Disco American Heritage Magazine by Peter Braunstein, Vol, 50, No. 7, November 1999

This world where I worked nights and weekends for several years was the inspiration for my next novel, a lusty murder mystery, The Redemption of Don Juan Casanova—that mixes seduction, sex and religion.

His fourth novel is The Redemption of Don Juan Casanova. 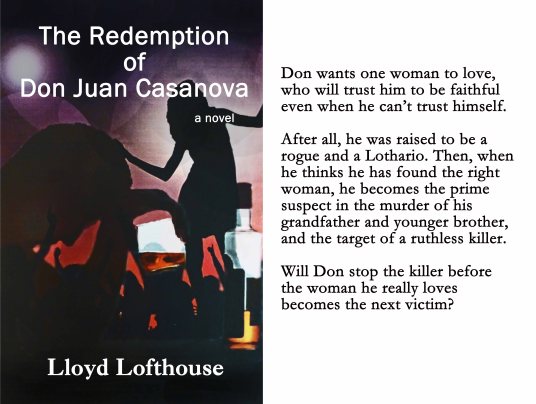 Lloyd Lofthouse also worked as a maître d’ in a nightclub called the Red Onion for a few years. A romantic at heart, in his award winning novels, he tests true love in difficult situations and the challenges of keeping that love alive. My Splendid Concubine, his first novel, is an epic love story that teaches acceptance and respect for other people and their cultures. Running with the Enemy, his second novel is a love story that will either cost the characters their lives or will complete each other’s hearts. Lloyd Lofthouse lives with his family in California’s San Francisco Bay area.

3 responses to “Forty-Five thousand U.S. Businesses are Built on a Foundation of Legal Seduction and Sex”