On a recent Wednesday night near sunset, I looked out my writer’s cave window and saw this scene. The front of the house faces the sunset, and I ran outside and snapped off four shots with a borrowed smart phone.

Then I asked myself, why not do a post showing where I write—the clutter, the mess. A digital camera made this silly idea easy.

The first shot is toward the north, the second shot east, and the third faces south. The last one faces west from inside the house toward my desk and the window. 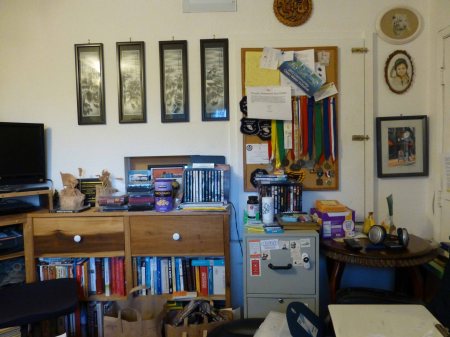 I built all the bookshelves and drawers. Did you notice the wood carving of a fight scene from The Romance of the Three Kingdoms? There’s a story behind that wood sculpture to share one day.

This post was written to avoid editing and revising a manuscript. I spend a lot of time in this ninety-square-foot room facing the sunset. It’s amazing how much space we actually use most of the time.