There is no way to know when Robert Hart learned the details of the Taiping Rebellion. In Tilly’s opinion, he should have known all the details before the summer of 1855.

However, I have had the privilage of reading Robert Hart’s journal entries for his first year in China and he never mentions the Taipings—not once, but he does write about pirates, lonliness and his struggles to learn Chinese while working long days at the British consulate in Ningpo.

In  Entering China’s Service on page 156, it says, “Since 7 September 1853, the native city of Shanghai (not the foreign enclaves) had been in the hands of rebels from the Small Sword Society, an off-shoot of the Triads (note that it doesn’t say Taiping Rebels); Hart wrote of these circumstances when he was there (in Shanghai staying in the British sector) in route to Ningpo in early October 1854.”

On page 157, the editors said, “The local Triad Society rebellion at Shanghai was of course only a pale reflection of the great sweep of the Taiping Rebellion … In May 1855 … Hart heard that the rebels (the Taipings) had taken Yushan … between 300 and 400 miles from Ningpo. … Ningpo had more immediate concerns in the feud between the Portuguese lorchamen and Cantonese pirates. The prevalence of pirates … was a grave threat to the shipping of all nations (not the Taiping Rebellion).”

The Taipings did not control one port in China at this time.

Two months later, Robert would be spending the summer with his friend Captain Dan Patridge and there is no way to know what happened at Patridge’s house, because Hart burned the journals that covered the next 2.9 years—what did Robert want to hide?

In fact, Hart does not go into detail about who the Taipings were anywhere in his journals while he was still working in Ningpo, and that is understandable since he arrived in China not speaking or reading Chinese and was often isolated from other English speakers for days at a time in Ningpo as he worked long hours at the consulate dealing with merchants (both Chinese and Western) while struggling with the frustration of learning Chinese.

How could Hart discuss the details of a Chinese rebellion when he could not hold a conversatoin with the Chinese? It was also obvious from the entries in Hart’s journals that the few English speaking people he met in Ningpo, Shanghai or Hong Kong were not concerned about the Taiping Rebellion. It wasn’t a topic foreigners were interested in.

Knowing that there was a rebellion is one thing.  Knowing the specific details and history behind the cause of the rebellion is another and that was what Robert learned from Captain Dan Patridge in July 1855.

Hart arrived in Hong Kong in July 1854 and in July of 1855 he spends the summer with Partridge where he was introduced intimately to the concubine culture and discovered the details of the Taiping rebellion.

By the way, Patridge was a real person and he was the principal agent in China of Jardine and Matheson, the largest opium merchant operating in China. In fact, the Taipings were against the opium trade and wanted to throw all foreigners out of China.

Hart’s first year in China was spent mostly in isolation from his own kind and he felt lonely because of this. Most of the people he met on a daily basis were Chinese and he didn’t speak their language and they did not speak his. It was a difficult and demanding situation at best without the benefit of cultural workshops, inservices and the Interent that we take for granted today. I’m sure that the Queen’s College in Belfast did not have history courses on China during the 19th century and probably most of the 20th too.

Hart says in a July 29, 1855 entry of his journal, “I fear when I go back to the Consulate for the winter, I shall feel the loneliness very much.”

On page 169 of Entering China’s service, it says, “Unlike the lawlessness at Ningpo, which was due to crime—large scale, to be sure, but not organized as rebellion—the disorder of the 1850s at Canton was connected directly or indirectly with the rebellion of the Taiping Heavenly Kingdom.”

It would not be until 1858 that Hart was transferred to Canton. While Hart worked in Ningpo, as you may see, the concern of the Chinese and Westerners had little to do with the Taiping Rebellion and more with pirates and crime. Hart did not study Chinese history as it happened. He lived it and did not experience the Taiping Rebellion during his first year in China.

In addition, it wouldn’t be until Ayaou was his concubine, that he would start making progress learning Chinese and by then he knew all about the Taipings thanks to Captain Patridge, the opium merchant.

Tilly at the Readers Cafe has a right to her opinion about the novel but does not have a right to defame me or my work with a sloppy review filled with false claims of historical inaccuracy.

The second challenge (another example of defamation) to the history that flows through The Concubine Saga came from the Reader’s Cafe in a June 2012 review written by Tilly. This book review site has no search-engine traffic rank according to Alexa.com (at the time I checked) and has only 10 members but according to its Blog Archive it was launched in 2006.

Is this an indication of the popularity of reviews written on this site?

Anyway, Tilly proclaimed for all the world to read as long as the Reader’s Cafe remains an active domain that:

1. The time it took for Robert Hart to sail from  England to China was unrealistic.

2. Tilly claimed that Robert Hart could not have been raised to respect women as equals in Victorian England.

3. Robert Hart could not have believed that paying 33 pounds for a concubine was cheap.

5. Eunuchs were not castrated before they were hired to work in the Forbidden City.

6. Tilly claims there was no such thing as the Santai Dynasty

7. According to Tilly, there was no way that Robert Hart could not have known about the Taiping Rebellion in detail before he learns about it in the novel.

In reply to number one, I never mentioned how long it took Robert Hart to sail from England to China. The original first edition of The Concubine Saga opens as Hart arrived in Hong Kong after a long voyage from England.  Hart’s next voyage takes place a few days later from Hong Kong to Shanghai and I assure you that I followed the time span it took to make that voyage from Robert Hart’s own journal that covers his first year in China. He goes into detail about that trip even mentioning the pirates that chased the ship he was on.

The Concubine Saga (a revised and edited version of My Splendid Concubine combined with the sequel Our Hart, Elegy for a Concubine) says in the third paragraph on page 3, “A month earlier, his ship had reached Hong Kong on July 25…”

It’s all in Hart’s journals—every step of his journey after he arrived in China. In fact, Hart’s journal does not mention how long it took him to sail from England to Hong Kong other then he was seasick most of the voyage. However, he goes into detail about the voyage from Hong Kong to Shanghai.

Tilly’s next example of defamation was to claim that Robert Hart was not raised to respect women as equals. To make this error meant she probably didn’t read the novel carefully or has attention deficit disorder or short term memory issues.

Continued July 10, 2012 in The Self-Annihilation of Credibility – Part 3 or return to Part 1

So Many Precious Books  May 30 Review & Giveaway

To Read or Not to Read  June 27 Review

To Read or Not to Read  June 28 Guest Post & Giveaway

IN THE 19th and EARLY 20th CENTURY, ROBERT HART WAS CRUCIAL TO THE SURVIVAL OF CHINA!

WALNUT CREEK, CA (3/2/12) — Robert Hart (1835 – 1911) was the ‘Godfather of China’s modernism’ and the only foreigner the emperor of China trusted. In fact, Hart played a crucial role in ending the bloodiest rebellion in history, and he owed this success largely to his live in dictionary and encyclopedia, his Chinese concubine Ayaou. In Dragon Lady, Sterling Seagrave wrote that Ayaou “was wise beyond her years”. In Entering China’s Service, Harvard scholars wrote, “Hart’s years of liaison with Ayaou gave him his fill of romance, including both its satisfaction and its limitations.”

With sales in the thousands, award-winning author Lloyd Lofthouse brings My Splendid Concubine (2007) and the sequel, Our Hart, Elegy for a Concubine (2010) together in The Concubine Saga (2012).

My Splendid Concubine was the love story Sir Robert Hart did not want the world to discover.

In the sequel, Our Hart, Elegy for a Concubine, he was the only foreigner the Emperor of China trusted.

Soon after arriving in China in 1854, Robert Hart falls in love with Ayaou, but his feelings for her sister go against the teachings of his Christian upbringing and almost break him emotionally. To survive he must learn how to live and think like the Chinese and soon finds himself thrust into the Opium Wars and the Taiping Rebellion, the bloodiest rebellion in human history, where he makes enemies of men such as the American soldier of fortune known as the Devil Soldier.

My Splendid Concubine earned honorable mentions in general fiction at the 2008 London Book Festival, and in 2009 at the Hollywood Book Festival and San Francisco Book Festival. 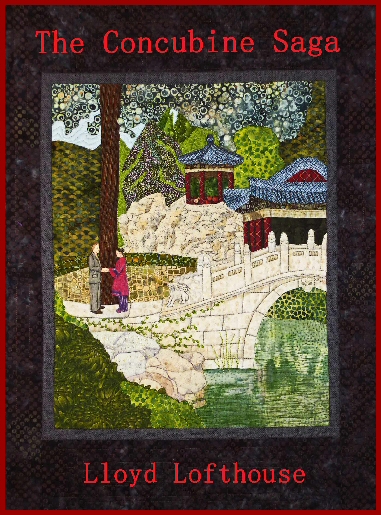 In addition, The Concubine Saga picked up an Honorable Mention in Fiction at the 2012 San Francisco Book Festival.

Lloyd Lofthouse served in the Vietnam War as a U.S. Marine and lives near San Francisco with his wife and family with a second home in Shanghai, China. As a former Marine, Lloyd earned a BA in Journalism and an MFA in writing. His Blog, iLook China.net, currently averages 600 views a day with more than 200,000 since its launch in January 2010. My Splendid Concubine.com, his Website, has had 72,000 visitors since December 2007. At Authors Den, his work has been viewed 336,000 times.

In addition, in 2008, following the launch of My Splendid Concubine, Lofthouse appeared as a China expert on more than 30 talk-radio shows from The Dr. Pat Show on KKNW 1150 AM in Seattle to The Smith and Riley Show on WFLF 540 AM in Orlando Florida.